World of Fox – Everything is for the Best 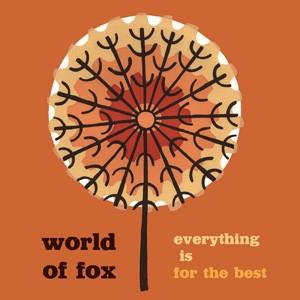 Seems my case of folkiness is showing no signs of abating – does this mean I shall have to grow a beard if only to stand around stroking it meaningfully (or is that just a bit pervy?). Anyhow my latest folky thang is the improbably named World of Fox, aka Simon Fox, ex-post-rock guy, now all gentle and acoustic.

I got to Mr Fox via the Scott Matthews gig (ah, quite brilliant) where the support was James Summerfield (splendid chap) and scurrying around various places stumbled across World of Fox with whom JS apparently collaborates and who produced the latest Summerfield product… phew

Right, the duly purchased CD, Everything is for the Best arrived post haste with a Post-It Note from Mr Fox (ah don’t we all love to feel that its personal!). Unashamedly folk with a capital F it’s another charming (word of the week, see the My Sad Captains post – must buy a Thesaurus for alterative words).collection of songs written, played and sung by Simon Fox – clever so-and-so.

Anyhoo its all jolly good stuff and well worth eight quid of anyone’s money, so go and get yourself a copy! He’s up and playing at the Moseley Folk Festival in Brum at the start of September along with his pal James Summerfield – also playing are the unutterably brilliant McClusker, Drever and Woomble (ah the joy)

This entry was posted in Uncategorized and tagged James Summerfield, Simon Fox, World of Fox. Bookmark the permalink.

1 Response to World of Fox – Everything is for the Best