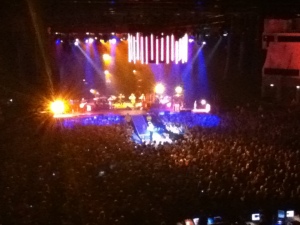 Sometimes my pessimism can be proved to be so misplaced. Worries that Elbow’s Build a Rocket Boys might be some post – Mercury sellout were groundless and the sense of mild despair that they were to play the soulless arena circuit was shown, in the case of the Cardiff Arena show at least, to be wrong. These cavernous spaces are indeed a daunting prospect for many a band – echoey spaces with as much personality and charisma as an empty own-brand can of baked beans.

Support for the night was in the welcome form of Villagers whose album, Becoming a Jackal, is a delight at each and every turn. Skilfully delivered in this inhospitable setting some of the more intimate moments were however, swallowed up by the hungry cave. The crowd, or at least those in easy striking distance were rightly appreciative of this very fine collection of songs. Methinks the whole set would be more easily enjoyed in a more intimate setting, and indeed they will be back out in smaller venues soon, with a welcome date at the Trinity in Bristol on 18th May. But all credit to Elbow choosing such an excellent and appropriate support.

In truth this sort of care and consideration was the hallmark of the evening in so many ways and in large part the reason why it was such a success and not the impersonal ‘we have arrived’ sort of show it so easily could have been.

From the off and the hanging video portraits of the occasionally moving band members who left stage left as the real band entered from the right there was a sense of being part of a shared understanding, a camaraderie of old friends that retained the authenticity of the relationship between fans and band.

The apparent determination to remain connected the one with the other was there in the regular banter, the liberally used runway extending out into the crowd and the  general approach typified by the deadpan response by Guy Garvey to the wolf whistles that greeted the shaking off of his jacket: “Hardly, but thank you”.

Not surprisingly the set included much of the new album, imbuing the new material with even more backbone than the songs already had on the album, notably the case with Neat Little Rows.

But there was space for stuff from earlier albums, and not always the most obvious selections either. Sung from the end of the runway with just a piano accompaniment it was a joy to hear Puncture Repair that most delicate dedication to friendship. Tower Crane Driver, Weather To Fly and the heart wrenching Great Expectations acted as the counterbalance to the likes of Grounds for Divorce, On a Day Like Today and Open Arms in the deftly structured set.

I shouldn’t be surprised but consistently am by the sheer quality of the musicianship and the truly remarkable voice of Guy Garvey who sings the great majority of frontman into oblivion.

Despite the dubious qualities of the venue,  being sat in the balcony (although the view was fine) and the characteristically chatty  Cardiff crowd this was a fine show in all departments but especially in it’s success in remaining an intimate affair between friends who ‘know what I am like and don’t mind’ as someone once said, a neat trick if you can do it… and they can

This entry was posted in Uncategorized and tagged Elbow, Gig, video, villagers. Bookmark the permalink.