Posted on November 30, 2008 by haymoncollins 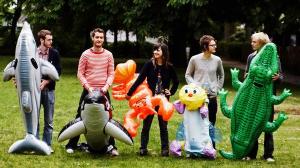 Its almost exactly three years since I first heard of My Sad Captains on podcast between Steve Lamacq (BBC) and Nic Harcourt (KCRW), the now sadly defunct Music Exchange, where they would swap snippets of new bands they were enjoying. Mr Lamacq played a clip from the track All Hat and No Plans which ended up being a his ‘single’ (do those still really exist?) of the week in May 2008, and released through White Heat Records

My Sad Captains hail from North London and their name is taken from a Thom Gunn poem it is claimed. Their influences seem mainly American and not so very contemporary – the most obvious being Pavement but their may be bits of Sparklehorse and Grandaddy in there as well.

In their original iteration there was a strong, not unwelcome, Pavement feel to their stuff, but later with the addition of Cathy on vocals and bits and bobs, its developed a more poppy feel. Their MySpace has All Hat and No Plans together with its flip side. It also has a track from back from 2005, Bad Decisions. At the time All Hat and Bad Decisions were available as free download from their site together with two other tracks Ghost Song and Hide and Seek. But the web site has been under reconstruction for ever….

A long heralded album is still imminent but it seems that MSC might be off to SXSW which with a bit of luck will do them some good. There is something of the summer about their music, jingly , laid back and sunny – if they can get to Austin, Texas how come they seem unable to escape the M25 and head West (or any other direction) come on chaps, make an effort!

Mp3 My Sad Captains – All Hat and No Plans

This entry was posted in Uncategorized and tagged My Sad Captains. Bookmark the permalink.

1 Response to My Sad Captains