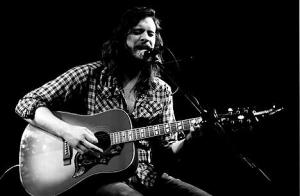 Whilst I am in an introspective and reflective mood, it seems like an ideal time to mention Vacilando Territory Blues by J Tillman. Mr Tillman does the drum thing for the Fleet Foxes but also has a (short) track record all of his own.

He more than held his own as support for the Foxes earlier this year when we saw them in Bristol, sitting alone for most of time on the stage, delivering his songs to a suitably hushed and supportive crowd. At the time he mentioned his upcoming solo album, and finally here it is
Naturally thoughts and comparisons turn to the now uber-trendy Foxes, but this is rather unfair it seems to me. Whilst there are inevitable parallels in some ways this music is his own. He has a fine voice, and one that stands up extremely well live.
The album is achingly beautiful; understated songs of real charm, delicately played, so sparsely played that they almost disappear at times. Quality playing abounds, aided and abetted with a couple of Foxes for good measure. ‘New Born’ stands out as does ‘Steel on Steel’ and ‘Barter Blues’. The super-laid back mood only changes for ‘New Imperial Grand Blue’ which gives a glimpse of Tillman et al being capable of ‘rocking out’ a little more.
I know reviews have been mixed but really this is a fine album, and one which plays well for me in my current inward looking state. What a shame he only has one UK date on his short promo tour, and that of course in London
J Tillman Myspace
Web Site

This entry was posted in Uncategorized and tagged Fleet Foxes, Gig, J Tillman. Bookmark the permalink.