Posted on December 13, 2009 by haymoncollins 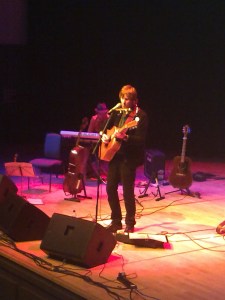 A little bit of heaven sandwiched between two slices of misery. Perhaps unwittingly going to a gig in central Brum on a Friday night with a Christmas fair in full swing, a CBSO concert at Symphony Hall and the Paramore at the NIA wasn’t such a piece of great timing. Almost an hour to park meant no time to eat anything save a hideous Mucky D’s for me, the Lad and his better half, fresh from her first term at Cardiff; and the IDS was having problems getting into fair Birmingham town, so we were all late in for the start

The (relatively) newly refurbished Town Hall is a grand affair, comfy seats and all, but not perhaps the acoustically most forgiving venue with sounds ricocheting around the room despite the off perspex baffles hanging from the ceiling 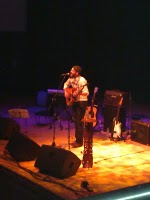 James Summerfield was on first for a short but charming set not dissimilar from the one he played at the SM gig in Wolverhampton earlier this year. Mr Summerfield is a fine fellow, with some lovely tunes. Understandably grateful to SM for his continued support he should none the less learn to be a little less self deprecating and be a bit more comfortable with his own obvious talent. Still his apparently relaxed manner and gentle banter was a perfect opener.
Jo Hamilton drifted on accompanied by her bassist and keyboard/percussionist, towering over the mic in her over-long black trousered outfit. Having admitted to a horrendous cold that was all to evident when she spoke, you couldn’t help but feel that she was courageous to come on at all. Her illness was invisible from her performance, an extraordinary voice and two fine colleagues. Perhaps the music was too melancholic for the occasion, but I was alone from we four to fine something quite beguiling and beautiful in the set, maybe in a more intimate space, perhaps on my own late at night…. the skills and musicianship is clearly there in spades, worthy of trying again it seems to me.
Mr Matthews on finally and opened with a couple of solo pieces and then one accompanied by Dan the dapper chappie with the hat. Then the remainder of the band came on, Sam the drummer and a now forgotten (sorry) bass player. A mix of stuff from the latest and first albums, everyone was in fine fettle, easy ways and expert playing. Mr M ‘fessed to be being very nervous but I saw none of it.
There is something even more endearing about his music in a live context, his voice more abstract, a fluency to his playing all no doubt developed by a few years of live gigging now. I have quite forgotten the set order and it matters not, he could have played all night as far as I am concerned, by turns vaguely psychedelic folky rock-out and delicate, personal acoustic.
His ability to tune his guitar for the next song, despite a busy back stage helper, hasn’t improved since we last saw him. But this helps with the between song banter and the curiously matey but nervous bonhomie.
A fine and moving hour and forty minutes set finished all too soon and we were off back into the Brummy Friday night, a few words with Mr Summerfield and then back to the car and to sit for 45 minutes to exit courtesy of the outpouring of the Paramore- ites from the NIA. There you have it, the sandwich – but worth every bit of the gruelling mess than can be Birmingham for Mr M’s music. He really should be better and more widely appreciated, as the IDS said, with all the homogenised and sanitised ‘talent’ in the likes of X Factor clogging our ears, who in their right mind wouldn’t prefer some genuine original talent like Scott Matthews?
The incomparable Elusive video below and other stuff on Youtube
Scott Matthews Myspace
James Summerfield Myspace
Jo Hamilton Myspace