Posted on February 18, 2010 by haymoncollins 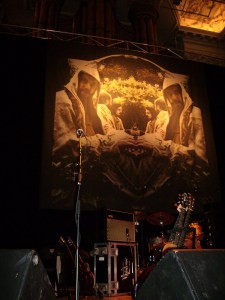 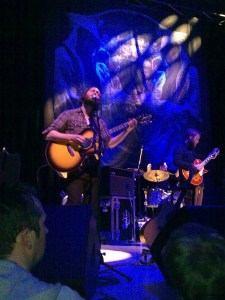 Well it was a real shame that IDS couldn’t make this gig but work is work and must be attended to and he had to get down and dirty with some cameoid (!). Birmingham Town Hall is a splendid venue, the sounds a bit echo-ey but impressive none the less. The lad and I claimed our place up front before the uniformly gentile and middle class crowd arrived. Could it really be three years since we saw Midlake first at the old Zodiac in Oxford?

The Lad was the one to notice that the huge backdrop version of the album cover looked curiously like a lion or big cat face at this size – surely not an accident, the cover is indeed odd being a mirror reflection of a few of the band dressed up in monkish gowns.

Sarah Jaffe, like Midlake is a citizen of Denton Texas, and was the support for the show. Her band included Robert Gomez who we last saw supporting Midlake in 2007. Jaffe has a good voice and put in a strong of songs.

Midlake themselves came on as a seven piece, including six beards, and promised a big full sound – three guitars, bass, drums, keyboards and flutes and lead vocals with acoustic guitar. They came on stage with no pomp and just got on with it, all looking relaxed and comfortable. Through the set the band played the whole of the current CD Courage of Others, with songs like Children of the Ground, Rulers, Ruling All Things sounding especially strong. The songs without exception sounded more muscular, more direct and the structure of the songs and their melodic complexities clearer. The live set really helped me get more from this album, made more sense somehow. The Courage of Others is not the most immediate of albums, it needs time to reveal itself and the show only helped this process.

Everything was enthusiastically received but the songs from the Tales of Van Occupanther album perhaps understandably got the most rapturous welcomes. Bandits, Young Bride were there as was an epic version of Head Home and an immense Roscoe with a great build up before breaking into the song proper. Branches was used as the encore and so all in all they played just about all of their current oeuvre (given that by their own admission the ‘don’t play’ the first album)

Tim Smiths vocals were in fine form despite his shy and laconic style but the outstanding playing, in my view, went to the lead guitarist who I didn’t know and who isn’t part of the usual band and who put in some fine harder edged guitar work, and also to Mckenzie Smith on drums who displayed great style, sensitivity and musicality throughout.

A hugely enjoyable gig, a band that felt stronger and more confident than three years ago, with an album that only gets better with repeated listens. Lets hope its not three years til they are back again.