Posted on December 13, 2010 by haymoncollins 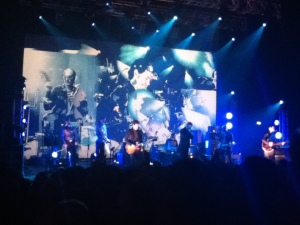 This was the third National show in a week and some would say (Mrs H-C amongst them) that this was a little out of order. But much earlier in the year I had decided that this may be the last time for a while that Messrs The National would be on our shores, and I just had to grab the chances that presented themselves. This was the last of their three nights at the Brixton Academy. A large’ish venue of some 5000 souls, a bit cavernous but just holding onto that intimate end of the spectrum ( unless of course you are at the back of the balcony)

Being on my own this time around I nabbed a spot against a surge barrier close to the front but not so close to look terminally sad and lonely. The chilly space filled quickly on this coldest of London nights, snow threatened for later, and a goodly crowd welcomed Phosphorescent. Third time around their material was more familiar and songs like Los Angeles from their latest offering have become firm favourites. What a shame that the inevitable London knobheads turned up and shouted their way through the set right in front of me… there’s a perfectly good bar for a chat, why spend the money to ignore the support…. grrrr

Th aforementioned knobheads were clearly there to knock back a few dodgy blue bottles of alcohol and have a ‘good time’ and I tried valiantly to ignore their idiocy through the early part of the National set, before they decided that there was a small pocket of space much closer that they had to invade. 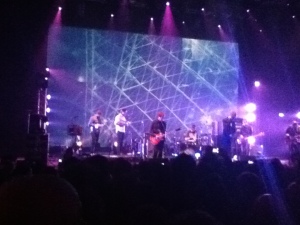 Three shows and three different sets from The National gave me the answer to how a band keeps on the road for so long and still apparently has fun and sounds fresh. Again it was a delight to have some of the older songs back in the set  – Abel, Mr November (of course) Green Gloves, All the Wine and the sublime About Today, all woven as weft to the warp that was the material from High Violet.

It was an extra delight to spot (and then be told of) Mr Thomas Bartlett, aka Doveman, on keyboards to the right of the stage. Mr Bartlett has produced one of my most favoured albums of recent years, The Conformist, and has played on several National albums in the past. His presence was low key (excuse the pun) but added extra depth and warmth – perhaps one day he will grace us with a show of his own…

The sound tonight was good, the back projection worked well from where I was and the band gave off what felt like a genuine sense of gratitude for being able to fill Brixton three nights on the trot. All the shows this week were energy filled, with a relaxed sense of humour running between the band members, a feeling of being ‘bien dans leurs peaux’ (good in their skins), a confidence and assuredness that must result from months of touring. Three excellent nights, shows to remember, from a band riding high on success and recognition.

Out late into the December night, heavy snow falling down onto Brixton, not quite the ‘brutal night’ Matt Berninger described but a remarkable one, a remarkable band playing remarkable music – I don’t think that Mrs H-C understands why this band touches me so, and I guess I won’t be able to tell her.

This entry was posted in Uncategorized and tagged Doveman, Gig, Phosphorescent, The National, Thomas Bartlett. Bookmark the permalink.