Posted on April 2, 2011 by haymoncollins

I have scribbled before about just how good the new Green EP from Brave Brave Bats is but it is worth repeating – it is very good indeed. Tonight was the official launch of said Green EP at the still charmingly dishevelled Louisiana. A large red sheet emblazoned with the bands insignia fluttered from the balconies like a naive artistic impression of a call for help from Gotham city. Upstairs behind that stage hung a similarly sized Bats wall hanging in the EP’s spring green colours (regrettably cast into autumnal brown by the venues unalterable lighting) and so the stage was set…..

The lad and I were uncharacteristically late, waylaid by a desert and talk of Possible World theories (sorry about the distinctly un-academic link), and so missed all but the last notes of EJ Essau’s opening set. But we were there for all of The Tesselators romp though a few tunes and especially the wordless tune that might presage the rest of the yet-unrecorded new album based around super-heroes. What a jolly bunch of cockney lads they are, inexplicably lost in the backwaters of distant Bristol. Their very fine double EP La Ciudad/The City has had honourable mention here before and should be sought out by anyone with half a brain.

With surprising punctuality Bravo Brave Bats popped up on sage at the appointed hour and proceeded to blitz their way through not only the new Green EP material but much (if not all ) of the Red EP as well. Trying not to sound too sycophantic but in the same way that the Green EP heralded a significant leap forward for them in a recorded context, so too did tonight’s forty five or so minutes on stage. The steady gigging schedule is honing their stage work, there is a confidence and increased maturity in their playing  and delivery. 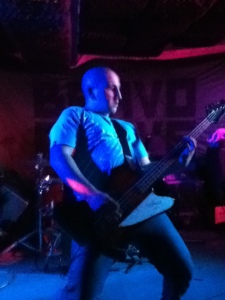 Of course the perpetually effervescent Hector bounced around stage like Tigger on acid, threatening to cave his skull in on the low hanging beam that stretches invitingly across stage. But the normally diffident Dan on bass seems up for stealing a bit of limelight now it seems with his “Si Si, je suis un Rock Star” poses and floor rolling antics. But neither let the showmanship affect the playing, Dan’s bass is deceptively good , dare I say lyrical (although that sounds a bit odd but hopefully you know what I mean) and young Jack the Lad Hectors guitar is sounding awesome, the filthy distortion and looping helping to build a sound for the band that is distinctive and unmistakably their own.

Not surprisingly the crowd were theirs from the start filling the intimate space that is the Louisiana with positive energy ( oops sounds a bit hippy trippy there) and enthusiastic appreciation. Of course the likes of Adele and Pedalling are obvious crowd pleasers but for me its still the trio of Wagons, Hymn and Dry Drop that are the most accomplished, the most enjoyable and the clearest signals of how this band might grow further.

A hugely enjoyable set, a band that looked as if they had a real blast, but perhaps more significantly here is a something blossoming into genuine, durable band; capable of quality recorded material, energising live shows and the real potential for something special. To echo the wags in the crowd… Bravo!

(oh and apologies for the less-than professional pix but do look at Anthony Palmers FB for much much better ones http://www.facebook.com/album.php?id=668010952&aid=343975)