Well it had taken a long time to get even close to a HNIC live show but finally here it was at the Left Bank in Bristol. The penultimate show of their European tour beset as it clearly was with transportation issues, but maybe the less said about that the better.

I find myself a tangle of emotions going to see a band whom I have long wanted to see and whose music has claimed a particular hold on me. I must also admit to a level of anxiety knowing a little of the difficulties of finding a venue and also the challenge of drumming up a buzz for  new band in town. But thanks are due to Tom of Gold Flake Paint for pulling it off and getting HNIC to Bristol.

Safe to say that the Left Bank is an intimate little venue with the bands tucked into a corner under the stairs. Still for the punters there’s some Bath Ales in the cooler and some comfy chairs whilst you wait. Still all in all it must have been a significant change from the Union Chapel in Islington, the venue for earlier that same day with it’s hushed atmosphere and sensitive acoustics.

The support for the bulk of the tour, Birds of Passage didn’t make it this far and was at the same time on the long trip back to NZ ( we did catch up for a quick chat afore she left). In her stead was Leicester band To Bury A Ghost, whose rather fine EP has had honourable mention previously in these pages.

TBAG opened with two tracks from the EP and judging by the reactions of the ubiquitous Jeff (Geoff?) he, and others, found it very pleasing stuff. They also played a new track Dancing with an Epileptic (may have got this wrong but someone shout out the right title – they did and the title is Dancing with Epileptic – so now you know!)) which was heavy on the distorted guitar but as a track, demonstrated a progressive growth and a little less chopping and changing within the track than might be accused of some previous tracks. The short set ended with Beginning is the End, again form the Hurt Kingdom EP. As the young man in the seasonally inappropriate hat said, not bad at all for their second gig. 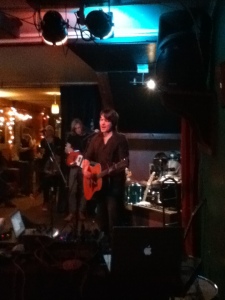 Her Name is Calla produce music with a deep sense of authenticity (I know, sorry, I keepbanging on about authenticity), a sense of genuine emotion, music that is heartfelt. As recorded music there is obviously time to tinker and get the dynamics right (shame, by the way, on the woeful knobhead who complained about the said dynamics and ‘intermittent beats’ – sir, you are a cock), but I did wonder, despite their rep as a live band, just how that might be carried off at a gig. Well in brief, they do it just fine and I shouldn’t have worried.

Now I am notoriously rubbish at remembering set lists but I know that last night they kicked off with the rather wonderful Maw from the EP released to coincide with the tour. It’s still available through Denovali but regrettably all the gold versions went on the first night in Germany – maybe a few more pressings next time ? ‘Twas during this opener that I decided that drum-meister Adam, apparently the author of Maw, reminded me of nothing more than Animal from Muppets – albeit in a good way I hasten to add – secreted away as he was beneath treads four to ten of the staircase running to the first floor.

Other tracks included,  my favourite from the Quiet Lamb, Pour More Oil, Nylon from way back a little, the epic Condor and River and the set closed with a storming New England culminating in a feedback/distortion-laden coda. If anyone, especially the band, can furnish me with the full set list that would be great in a completist sort of way…

Thom the trombonist was frankly a minor revelation all on his own, a veritable Ornette Coleman of the slidey thing, and champion knob twiddler. Also how much fun would it be to be the great screamer on Condor? Mike’s bass was pretty rubbish, but I guess someone has to play bass… only kidding, no really, I  am… Tom’s vocals were top notch, I had wondered how they would stand up live, but if anything they are stronger and more assured than on record in my opinion. Of course we were all missing the flame haired Sophie and her violin which is such an intrinsic part of the character of the music, but lets hope that there are back to Brizzle soon with her skills back in harness. This is not to say that the chaps did anything but a fine job as a foursome, but five is a better number as any Roman scholar will know.

If the Left Bank was an OK introductory venue (intimate can be good) the music of Her Name is Calla is something demanding of a greater space to ‘breathe’. Its somewhat cinematic sweep, its drama and intimacy feels destined to accompany film and I am looking forward to the promised video compilation from Sebastien Dehesdin after his collection of Vimeo video clips from the tour. Rumour has it that this compilation might be accompanied by a DVD of the Union Chapel show which would be a fine thing.

All in all a genuine thrill finally to see the chaps in a live setting. Thanks to them for making the effort and to Tom at Gold Flake Paint for making it happen. Do come back again soon, and bring that Sophie girl with you as well…. I hear she ain’t ‘alf bad!

The drive home in the wee small hours through the owls and bats of the night-time countryside was accompanied by the mellifluous tones of the great John Grant at the end of his Czars days singing covers of great modern love songs from the Sorry I Made you Cry album – now there’s a counterpoint for you!

PS some good pix from Kate Southall on Flickr

This entry was posted in Uncategorized and tagged Gig, Gold Flaked Paint, Her Name is Calla, John Grant, Sebastien Dehesdin, To Bury a Ghost. Bookmark the permalink.