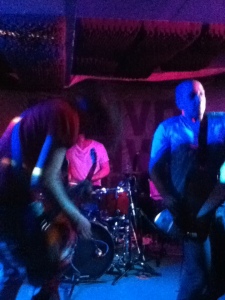 Bravo Brave Bats have launched a vlog (a video blog to the uninitiated) on Blip.tv with the inaugural edition live this very day, Easter Monday 25th April 2011. Now the stated aim is to  publish a new post every Monday over a twelve month period, which if you ask me (not that anyone is) feels like a serious commitment, but if they can pull it off would create a fascinating longitudinal perspective on themselves, ‘an unsigned band in a crowded music industry’ as they describe themselves, and how they take their next steps in their musical careers.

I have scribbled a few words a good number of times before on this excellent Bristol band, be it for their Green and Red EP’s or around their effervescent lives shows. I make no apologies for admitting to a personal connection of sorts to the band, and the arrival of this vlog is another facet of watching a band gather momentum and launch itself down the metaphorical runway.

All over the country there are bands of undoubted talent striving to make it to he next level. In this age of social media and DIY music, the advent of Myspace (now all but defunct surely) Facebook, Bandcamp, Soundcloud, Twitter etc etc all represent the double edged sword of unimagined promotional opportunity and at the same the danger of being lost in the miasma of other bands efforts to exploit exactly the same channels.

Now, like at any other time, success is not borne of talent alone. It’s not just what you know or who you know but how you get yourselves known , how you build that fragile but invaluable thing, ‘a following’ as well as how you get yourselves ‘noticed’. This vlog may well be another tool in the Bravo Brave Bats toolbox, building a fan base not just on their music (although of course that is the core aim) but also around a shared sense of understanding, almost a tribal thing; all of us vlog watchers, twitter followers and FB friends, investing a little bit of ourselves in a band, and as and when they succeed, we will all be able to revel in the vicarious sense of success that our investment has brought us.

That may of course all be bo**ocks but, if for no other reason, you should still sign up or view the vlog (http://bravobravebats.blip.tv/) through Blip.tv, or via iTunes or RSS  because here is a great, vital and authentic band, and you can never have too much of that now can you?

This entry was posted in Uncategorized and tagged Blip.tv, BravoBraveBats. Bookmark the permalink.