Maybeshewill – I Was Here For A Moment, Then I Was Gone 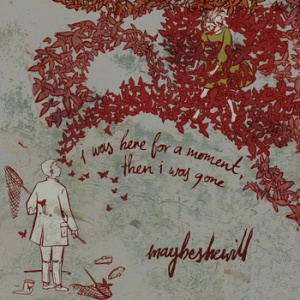 If truth be told I am suffering from musical indigestion this week. You know how it is, you wait ages for a good album to come along, and darn it, a whole slew of them turn up together (step forward Wild Beasts, Gang Gang Dance, Bill Callahan, Okkervil River…). It makes it hard to give them the time and attention they all deserve and instead I find myself greedily gobbling them all up too quickly – a bit like a couple of weeks ago with all those wretched Easter eggs, anyhow, I digress. As I say the last week or so has seen a bunch of excellent albums wrench my hard earned cash from my virtual wallet – and here is another, the elegantly titled I Was Here For A Moment, Then I Was Gone from the perversely named Maybeshewill.

I have had a drive-by relationship with Maybeshewill so far, snatching an odd track here or there but never really settling down with them if you know what I mean. The trigger to do just that has been a combination of their incessant Twitter Twatter and FB prodding and the knowledge that the fair Sophie Green (she of the inestimable Her Name Is Calla) has provided much violin work for the album, and also that the honourable Thom Corah (also of HNIC) has been lending a bit of his big silver slidey trombone work to some tracks here.

A little wary these days of he post rock label for fear of the earnest but dull and unimaginative output this sometimes heralds, from the off with I Was Here… it is obvious that this is a much lighter-of-touch set (no intention to be pejorative here ), a careful and welcome balance of electronic and organic instrumentation, a weaving of light and shade without the formulaic and heavy handed loud/quiet/loud shtick. The liberal use of piano, strings and horns humanises the sound, forcing space into the music, the space you need to get under the skin of the tracks.

The other immediate reaction for me was to the euphoric nature of many of the tracks here; positive, uplifting and energising. Not just because of the instrumental nature of the set, but there is also a cinematic quality here, big skies, wide spaces, light and air. The inevitable, but successful , muscular tracks here are wisely and carefully balanced with the lyrical, and there is some excellent playing here as well – skins and guitar worth special mention as are piano (and other keys), strings and horns – oops that’s about everything then!

I have to say, rather unexpectedly, that this is a really rather excellent album (tracks like Red Paper Lanterns, Words for Arabella and Critical Distance stand out even among uniformly good tracks). The chaps from Leicester have in my view a triumph on their hands – I hope they reap the rewards they deserve for it.

This entry was posted in Uncategorized and tagged Her Name is Calla, Maybeshewill, Sophie Green, Thom Corah. Bookmark the permalink.