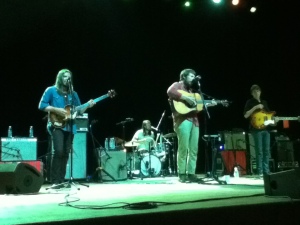 Its was almost exactly two years to the day since @IDSupremo and  I saw FF at the same Civic Hall venue in Wolverhampton. Then, as my post at the time said, it was sweltering hot and the death of  Michael Jackson was announced from the back of the hall. This time it was a grey June evening, threatening to rain, with a rather more fervent crowd that arrived early to queue in the odd fashion that the venue dictates.

Despite the greater crush and push from a crowd that befits a band that has ‘arrived’ we never the less claimed our rightful spot at the bar, up front. Support was from Ventnor’s finest, The Bees, who have played with FF several times now and are clearly something of a favourite for FF. I have to confess to not knowing them very well and their rather eclectic style, part garage, part psychedelic, part indie with a healthy dollop of Spanish/Latin flavour as well. Songs like Punch-bag (from way back in 2001), and the more recent Better Days (2008), stood out for me, along with last years I Really Need Love. But tell me something, how come all the band members seem equally at home on all the instruments, by the way, big man Tim Parkin (I think, I hope!) really gives it some welly on the trumpet  – seems they are interchangeable between keys, skins, strings and vocals… such ability surely can’t be legal now can it?

Fleexes came on in the habitual, slightly shambling but endearing manner, not for them the overblown grand entrance. In what became the flavour for the evening, Robin Pecknold started with thanking The Bees before even playing a note, hoping that ‘no-one dies tonight’. The chap behind me proclaimed, ‘He’s a fu**king legend, what a gentleman’ – and verily sire you are right, a gentle-man he is. Throughout the set he looked slightly taken aback by all the attention, embarrassed ‘thank you’s abounded, but given their extended touring schedule he must be used to such rapturous receptions by now. The set was a nice combination of new and old. I must admit to not really having taken to Helplessness Blues as readily as I had hoped, but as ever, seeing material live cements stuff in, and it’s all ‘speaking’ to me a lot more now.

As you would expect all were consummate professionals – in addition of course to front man Robin Pecknold’s trade mark vocals (despite the journey through puberty he felt  he was taking during the evening) and acoustic guitar, Skyler Skjelset put in some excellent, understated guitar and mandolin, and Christian Wargo great bass and harmonies. But I couldn’t take my eyes off of Josh Tillman, he was a revelation, his drumming was never less than outstanding, fluid and precise. Tillman gave the how show a different feel from the times I seen Fleexes before, he drove it along, adding power with an urgency and insistence. Material such as the Foxes could, were you not careful, slip into the twee but the muscularity of the show just showed how close harmonies, deft melodies and expert musicianship can still combine to provide music than is determinedly contemporary but interlaced with the grounding elements of the traditional.

By the way anyone who hasn’t tried J Tillmans solo stuff should go check it out straight away – he’s no one trick pony and worthy of greater solo acclaim than he has had (in the UK at least) so far.

Eventually some bright person will post the set list but I didn’t manage to enjoy the superb show and note the set details at the same time. But they did close the main set with the brilliant Blue Ridge Mountains, perhaps my favourite song, before returning for Robin Pecknold to deliver Oliver James to an excited crowd (my little vid embedded below – another of Montezuma segued with He Doesn’t Know Why can be found here), and then Helplessness Blues itself to round off an outstanding show.

PS some of @IDSupremo pix on his Flickr here