A Summer – Good Weather for an Airstrike 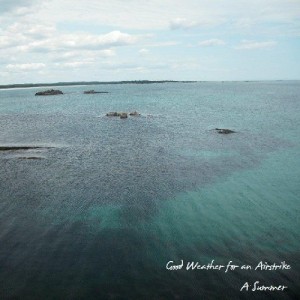 Just before the summer holiday kicked in I became the proud owner of A Summer by Good Weather for an Airstrike and it duly accompanied me to the sunshine. A Summer can be downloaded for a paltry £3 from the associated Sonic Reverie Records  Bandcamp site. More GWFAA stuff, including the A Winter suite,  can be found on his own Bandcamp site.

It appears that Good Weather For An Airstrike (hereafter GWFAA) started at the beginning of 2009 as a project  for Tom Honey (also of Sleepless Dreams & Damn Robot!) to try and help his sleep problems that resulted from his tinnitus; creating sounds and music that might induce some sleep. GWFAA is, it seems an approximate translation of Viðrar Vel Til Loftárása, the Sigur Ros track from their second album Ágætis Byrjun. Indeed Sigur Ros was Mr Honey’s introduction to the ambient/post rock world but in truth I find echoes of other artists rather than our Icelandic friends.

To my mind A Summer plays best as a suite of music, from start to finish. Given that I grew to know this music under bright blue skies, the heat of a middle eastern high summer and the cooling breezes of sparkling starlight nights; this album will be for ever reminiscent of such atmospheres, but it could equally be the soundtrack to many other places, many other environments – it is soundtrack material.

Throughout there is that ambient/electro-drone quality that soothes and calms in a way that reflects the motivation for recording music such as this. But across the tracks other elements add balance and texture; for instance the  Nils Frahm type piano around 27610.
The Beginning of the Rest of Our Lives is one of the more ‘lively’ with it’s drum track, courtesy of brother Rob Honey. In part this suite is reminiscent of some early Tangerine Dream with its hypnotic qualities; qualities that become progressively more apparent as the album develops.

Although A Summer will play anywhere, it is particularly well suited to balmy starlight evenings with everso slightly too much wine consumed, where it takes on a particular post-hippy vibe. As a huge red harvest moon drags itself over the mountain skyline it has an appropriate portentous symbolic significance for  track The Sun Sets Over Us , We Are Happy.

This is not an any anywhere , anytime, anyplace album for sure, but given the right conditions A Summer is a suite of great beauty and charm.  A mesmerising suite of music accurately suited to the season. I wonder if Mr Honey gets to sleep these days?