Scott Matthews – The Thekla, Bristol (and a little bit of Glee Club, Birmingham)

Posted on September 25, 2011 by haymoncollins 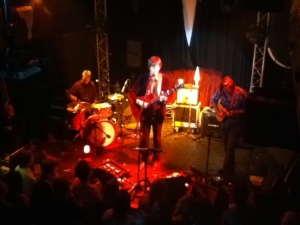 Arriving too late to eat yet too early to queue, Mrs HC, the Lad, the fair Natalie and I sauntered past the Thekla en route to a slightly over priced drink at the River Station. As we did, I had the briefest of groupie exchanges with young Sam the drummer for Scott Matthews – a taste of what would be an up-close sort of evening. By the way where else but Bristol could you sip your Bath ale and have a boat load of pirates sail past, cutlasses aloft yelling ‘aha’s’ to anyone who might hear?

The Thekla is a favourite with me, a boat moored in the Mud Dock, host to many a good gig. Best positions secured on the balcony we settled in for the first support (whose names I have sadly not retained). Fine voiced and nicely played, I couldn’t but think how much more appealing they would have been with one or two tunes not about death and dying.

Lotte Mullan and Alex Reeves and together played a more than pleasing set from Plain Jane, Lotte’s recent album. Ms Mullan had a fine set of pipes and Mr Reeves managed to add vocals, play drums and the bass keyboard – as was commented; see, men can multi-task. Together they delivered a great set of country-tinged folk. Hailing now from east London (although originally a country girl from Suffolk) she really seemed to appreciate the typically attentive but enthusiastic Bristol crowd, letting them play a few more of the quiet sort of songs. Mrs HC was much enamoured, and the cd was duly procured from the merch desk at the end as well as a little chat with Ms Mullan which was an added bonus – I wonder if they sold enough to guarantee the curry they were hoping for? ( I know that @IDSupremo had a chat with her the next night in Brum and of course got her set list duly signed).

As with the Wolverhampton show back in June at the bijou Newmarket Arts Centre, Mr Matthews started tonight with the exquisite Myself Again (a slightly flaky vid of this can be found here), one of an understandably large number of tracks from the brilliant new album.

The trio of SM, Greg Stoddard on guitar, vocals, mandolin and lap steel, and Sam Martin (I know both Mrs HC and Mrs IDS have a soft spot for Sam ….) on percussion, vocals and the occasional bass; feels like the ideal combination to me. It’s a combo with enough depth and flexibility to do justice to the material but not so large a group to over blow the more delicate and intricate stuff.

As usual with an SM gig there are lots of gaps for tuning, calls for less lights, more or less reverb and sundry other distractions. For some bands this might just feel disorganised and spoil the flow but here it just feels intimate, almost domestic, slightly matey and further connects the audience to the band. The domesticity was echoed with the feathery lampshade, the (slow to function) lava lamp and the furtive joss stick in the background.

Mr M seemed on very good form, and once the openers were over, relaxed and at ease. The set was largely a blend of the first and latest albums with some of the stalwarts like Sweet Scented Figure and City Headache having a level of muscularity and proficiency resulting from their regular playing. Mr M mused that he could play guitar with tabla backing all day and I guess we would all be happy to listen, but sometimes I wonder what a fully off-the-leash Scott Matthews might sound like…

Newer songs like Bad Apple, Walking Home in the Rain, the sublime Echoes of the Lonely and of course the outstanding Ballerina Lake have already established themselves  in the canon and feel like old friends.

The Thekla crowd was warmly appreciative of both the excellence of the playing and the unquestionable quality of the songs. Although he most likely says it to all his crowds, SM proclaimed the Bristol crowd to be “fu**ing awesome” and ” the best of the tour”. Well be that as it may, he must have been left in no doubt about the esteem in which he is held. A comment like “Thanks for remembering me” let slip the inevitable worry any one might have about keeping the attention of a fan base – but fans of artists like SM are loyal and patient coves one and all and it would be hard to see how that would change if music of thus quality is sustained.

An all too brief (altho’ still 75 minutes) but brilliant show gave way to our evenings up-close coda with all three emerging from the bow of the Thekla to regale us outside on the pavement with an acoustic version of Up on the Hill – superb – a suitably shaky vid of the moment is below.

Following on; the SM Glee Club Birmingham gig, the next night, was a stunner… I guess a very similar play list as the Bristol gig… delivered with passion and elegance, as ever. SM and the guys even treated everyone to a little Hungarian Folk jam mid set – tres coolio. PS the lamp is called Brenda and Scott and the guys are looking for a “Tour Tattoo” design that incorporates Brenda (personally think that is a little gauche, but there you go!)… Great chat with Lotte and Alex after – she proposed, but I had to knock her back! (joke Mrs IDS!!!) then quite a discussion with Scott, his brother Darren and his Mum and Dad – top folks! Top night – great memories.

1 Response to Scott Matthews – The Thekla, Bristol (and a little bit of Glee Club, Birmingham)