Posted on February 27, 2012 by haymoncollins 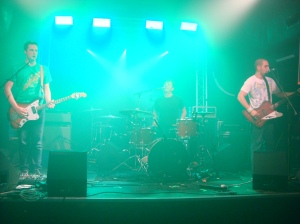 Bravo Brave Bats, Bristol’s best band (I will brook no dissent, they just simply are, and I know every  Bristol band…) is having a bit of a good start to the year; a new project of writing a song a month with a view to an albums worth at the end of the year, a slew of new gigs and a Den session with BBC Introducing Bristol.

Now BBC Bristol have rightly picked up on BBB before, an acoustic set, a show or two under the BBC aegis, but a Den session is a bit more like the real thing, despite it airing at some ungodly hour. This Den session is on iPlayer until the end of 2nd March, so toddle along and listen up. There is also a podcast to be had with a mildly hallucinating Ieuan being interviewed

The chaps put in three tracks for the session, Robots from the Purple EP and a BBC favourite it seems, Highwire/Tightrope one of my favourites from the same EP (with that great guitar octave shifting thing towards the end, mmmm) and a new track, the first of this years ambitious project, The Great Outdoors. The new track is simply awesome, for me their best thing so far, I love every spine-tingling thing about it, and if this is what we can expect for 2012 its going to be a corker of a year.

It’s great to hear the material step up a gear with the help of the Beeb chaps behind the glass, but I would pay good money to let BBB’s already excellent stuff sky-rocket with some decent studio time (maybe they should start an Indiegogo type pledge project to help fund some good studio time…?)

Anyways – the three tracks are captured for posterity and are downloadable from their web site as well as embedded below for your listening pleasure; and two of the videos made from footage of the recording session can be found here for The Great Outdoors, and here for Robots. Brilliant stuff chaps! The last vid for High Wire/Tightrope will be on their next vlog posting, so go check their site.

But BBB followers know that it’s in a live show that they just tear it up, kicking dust over other more ‘established’ bands. So a main support slot for the much touted We Are Augustines at the splendid Thekla was a plum gig. From the off the benefits of a bigger stage than usual and a better sound system instantly lifted them clear of their (extra)ordinary shows.

Opening with the superlative new track The Great Outdoors, guitar was crisp, drums sharp, and Dans bass was kicking. Hector, now with his wireless axe, told the crowd, “Move up a bit or else I’ll come to you”. Well to be honest he didn’t wait too long and was soon down on the floor in his trademark way – interactive crowd management I think it is.

It had be a while since I had heard Tent City from the Red EP and it sounded refreshed after its holiday. Four of the six tracks from the excellent Purple EP (Highwire/Tightrope, 1000 Things Before You Die, Robots and Final Song) wrapped around the lone but sparkling A Hymn from the Green EP.

I have long loved BBB for their unbridled enthusiasm, their drive and verve. I love the fact that three chaps, undiluted and without the aid of sundry loops, laptops, backing singers and 27 piece orchestras, can produce such thunderous uplifting and wondrous sounds.

It has been a genuine thrill to see how far they have travelled and how transformed in such a short time. But tonight felt like something a little more. Now with enough material to fill any set they wish, the ever growing sense of maturity and confidence, their fabled ability to own the stage, this could be something great. I don’t think I have heard them sound better than tonight, and they sounded damn fine. There you go , Bristol’s Best Band, no-one’s going to tell me otherwise…

This entry was posted in Uncategorized and tagged BBC Introducing Bristol, BravoBraveBats, Gig, Thekla, video, We Are Augustines. Bookmark the permalink.