Posted on April 6, 2012 by haymoncollins 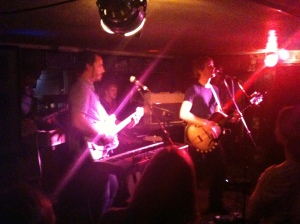 The fact that Shearwater, purveyors of such monumental and remarkable music, are not simply huge is a continuing mystery to me. There is an upside however (for we cognoscenti at least) in that you can still get to see them in such intimate venues as The Cellar in Oxford – named regrettably with dull precision. ‘Twas similar to two years ago when they played the charming but similarly small St Bonaventures in Bristol, but I had rather thought (hoped?) that this time around they might be enjoying slightly grander settings. To be fair the next night they played to an almost sold out Scala in London. 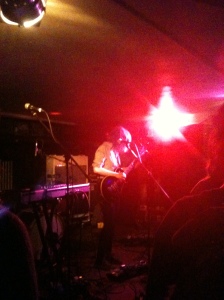 The delicate and endearing Julie Doiron opened for them, alone with her guitar and her fragile but absorbing songs – I felt guilty about not knowing of her before, and guiltiest still of no getting any of her material from the merch table at the end – but it can still be got from her site and her skills should indeed be sought out. Her wonderful rendition of Pavements iconic Shady Lane went down a real storm.

Shearwater’s music is never less than remarkable and the latest album is no exception; harder edged than its predecessors, it has consistently lifted my soul since it fell into my greedy and expectant hands a few weeks ago. The touring band this time made up of Mitch Billeaud (of The Lemurs) on keys and guitar, Lucas Osward (Minus Story, Hospital Ships and The Appleseed Cast) on guitar, twiddly knobs and backing vocals, Danny Reisch (The Lemurs and Animal Joy Producer) on drums and Christian Mader (Brass Bed) on bass and backing vocals, plus of course the peerless Jonathon Meiberg. Together they produce the more muscular sound needed to reproduce the current album and to add beef to some of their back catalogue.

Despite the roaringly good drums from Mr Reisch, the brilliant Rickenbacker produced bass lines from Mr Mader, Jonathon Meiberg’s distinctive vocals soared clear above the band and the alternately delicate and driving guitar and keyboard work than permeates all the tracks. 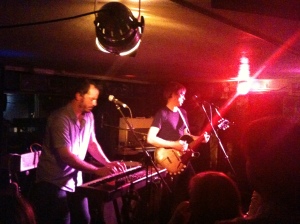 The generous set opened with Rooks and went on to reproduce all of Animal Joy interwoven with material from Golden Archipelago and Rook, the sublime Castaways being an especially wonderful moment. The new material sounded sparkling with Insolence and You As You Were surpassing even the recorded excellence of the tracks. It was clear that the set closer was going to be the final track form the album, Star of the Age, it’s glorious climatic build perfectly judged as a closer. They returned for an extensive encore of earlier material.

There are but few bands who have the capacity to transport me so completely, whose music is able to transcend the frankly more than humble surroundings of the venue, a band who I seem to find it hard to criticise in any shape or form, creators of wonderful music beyond qualification; but Shearwater is one such.

Here I am two days after the show still replaying it in my mind, a stellar show from a band that deserves so much more recognition. But what a joy to be able to meet them and chat briefly with them afterwards, such obviously fine chaps, so unassuming; what is it like, I wonder, to produce music that can resonate so deeply and leave such indelible marks?

2 Responses to Shearwater – The Cellar Oxford