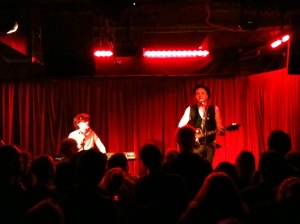 The teeny tiny Borderline is  tucked away downstairs just yards from the Friday night alcohol swilling young things of media Soho, the flirtatious Old Compton Street melange and the vaguely lost tourists of Charing Cross Road. Here I am slumped on the floor up against the unoccupied sound desk with my Coke, having earlier already too greedily necked a large glass of red.

Even at this time the stage seemed oddly empty; a couple of keyboards and a large reel to reel machine looked like we had turned up but the talent had forgotten . Clearly not a full band gig for Mr Hawksley Workman!

Truth be told I was rather unsure how the gig would unfold but the prodigious output and the wilfully hard to position nature of his material boded well and the Peeblemeister spoke in glowing terms of past performance and he is seldom wrong.

Presumably as part of his marking the tenth anniversary remake of Almost a Full Moon as Full Moon Eleven, this seemed nothing more than an opportunistic and rare show this side of the world. Before the support, he sauntered through the room fixed, like everyone else, to his phone accompanied by some homely looking ladies – is there really no entrance for the talent other than that for the normal rabble?

Openers, a two piece called Title Sequence, felt like the offspring between  Wheat and Kings of Convenience, with their slightly quirky, folk-tinged-with-a-bit-of-electronica songs, which sometimes ended unexpectedly (like this sentence). As the set progressed they seemed more at ease and the charm of their music came over more readily.

The Peeblemeister and the Abyss of Dubai arrived hot foot from Bristol during the support (the former slightly hazy  on antibiotics) but before we knew it on bounced HW and his sole companion Mr Lonely on keys.

HW clearly felt well and truly  chatty, like someone reunited with a bunch of chums after a long while. The set was peppered with anecdotes about bears in his yard stealing bird seed, joshing about drummers and their ‘look at me aren’t I clever’ showing off, and songs  breaking down into Islands in the Stream, various BeeGee songs and sundry other silliness. Factions of the crowd proved their devotion by delivering pre-organised new harmony takes, jokes abounded back and forth with the crowd all leading to the best artist/crowd rapport I can remember.

But throughout there was the exemplary, relaxed and intuitive playing of both  HW and Mr  Lonely, the brilliant songs, and that vocal range that impresses but stays the right of  parody. Those lyrics that combine the everyday, the humdrum with an acute and revealing observation provide a storytelling that could so easily drop into the cute and kitsch but always retains that bite and edge which must be ironically part of the reason why he hasn’t risen to greater prominence.

The set was like a greatest hits including sparkling renditions of the stuff I know and love including Jealous of Your Cigarette , Striptease, Your Beauty Must be Rubbing Off, A House or Maybe a Boat,  No Beginning No End, together with obvious other classics, like Smoke Baby, We Will Still Need a Song and Safe and Sound, know to the Peeblemeister and everyone else  but not (yet) to me.

It was a crowd that was totally his from his first step onto the stage, like old friends hanging out, a rare combination of fine music and a really good time in a great and intimate setting. All my apprehension about the gig was swept away from the get go,
the Peeblemeister was right again; an exceptional and heartwarming gig, the kind that should be prescribed on the National Health to blow the cares of the week away and raise your spirits. It has been a long time since I had had simultaneously such a genuinely good laugh and hear great music. Totally brilliant.