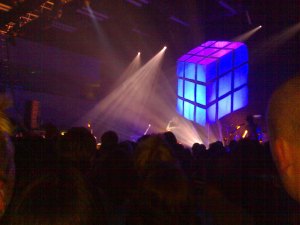 This was our second Elbow gig of the year, the first (and excellent) at Colston Hall strangely went without mention in my jottings. The rather misnamed ‘Great Hall’ at Cardiff University was the venue for this show, part of their post Mercury Prize shows (although booked long before winning the said award). The hall was frankly rather odd; short and wide with a nasty overhang at the rear, but no matter. The Welsh crowd an odd mix of B&B;’s like myself and student types but all intent on knocking back quantities of ale and having a good (loud) natter. I am afraid that the Guy Garvey-introduced support Jesca Hoop didn’t really do it for me, although she had good support from further down the crowd. I do think it is very hard for a single person with what are obviously ‘intimate’ acoustic songs, to make an impact and gain the attention of a crowd like this in this sort of venue. Listening back to some of the stuff on Myspace, the frail beauty of her songs is easier to assimilate than amid a raucous crowd on a Friday in Cardiff.

Our friends Elbow gave a very similar set to the earlier Bristol one, and no worse for that. The band and four-strong string section sounding confident and strong, Mr Garvey in excellent vocal form. He really does have an extraordinary voice, slightly gruff but with a great range and control, with just enough ‘regional dialect’ and capable of delivering both the most gentle of songs (see Puncture Repair) as well as the rockier songs (Grounds for Divorce). Newborn from their first album is still a magnificent song that builds to a majestic state.

Despite the difficulties of the venue, the crush of the crowd (how come the tall git always stands in front of me?), the dedication of some of the crowd to carry on their conversations (why come to a show and talk? Sod off to a pub and do that), Messr Elbow still managed to transport me on many ocassions during the evening – beautiful songs, intelligent lyrics, good playing, an OK sound system – can’t really fail can it? How many more time will we see them in a Great Hall, or even Colston Hall, environment? Are they destined for the Snow Patrol mega arena circuit? Lets hope not, they come alive in the smaller venues where the human contact can be made and built between artist and the crowd

This entry was posted in Uncategorized and tagged Elbow, Gig, Jesca Hoop. Bookmark the permalink.