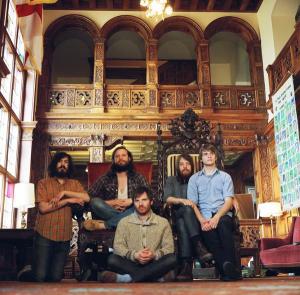 After missing FF on their visit to Bristol earlier in the year (gnash gnash) I made sure to get tickets for their return to Bristol at the Anson Rooms. The lad, his mate (looking uncannily like Shaggy from Scooby Doo) and I turned up good and early in the bitter evening air to secure what inevitably turned out to be a crap spot in the hall – aaagh why can’t I  be six inches taller, and why can’t everyone else be generally more considerate…. sigh

Anyhow support (seated in the red velvet armchair in the photo to the left) was from an enigmatically named J Tillman, like the FF from the Seattle area, Vashon Island I think, and had the identikit long hair and shaggy beard that seems to befit the current swathe of americana/folksie/country-esque bands. But armed only with his acoustic and and excellent voice he managed to keep the crowd both engaged and attentive – hoorah, we could actually hear his rather beautiful songs (is it just Bristol crowds that are prepared to listen quitely to bands? The Bon Iver experience was similar and doubtless a Welsh gig by Mr Tillman would be drowned out why the merry and garulous celtic brethern). Joined (although not recognised by the bulk of the crowd) for a couple of songs by the whole of FF and the ‘roadie’ Steve (although clearly a toothsome lady), his songs were clearly the sort worthy of greater and closer inspection  – a new album due in the new year I believe. Oh and by the way – Mr Tillman is now also the drummer, vocalist and raconteur for FF…
The Foxes turned up without much pomp, retuned and dithered a bit before launching into a life affirming set that covered all (I think) of the eponymous album and the Sun Giant EP. What a delight, those complex harmonies delivered with gusto and panache (isn’t that an Italian clothing brand?) and interspersed with some low key jolly banter – the crowd let them know that Bath is full of ‘posh c*nts’ much to their amusement and in turn they told us that they had voted for Obama (surprise) as McCain has a values structure based on his life of sin.
Hard to specify set highlights except for my two favourites, Myknonos and the final encore closing Blue Ridge Mountains. Well worth the wait it all seemed to me, could only have been made better with something better than the ocassional glimpse of them through the beanie headed hairies loitering in front of me – still this is now clearly my lot.
Hoorah for some uplifting and joyful music – lets hope they are able to sustain this through the next stuff they write
Photo courtesy of FF Myspace

This entry was posted in Uncategorized and tagged Fleet Foxes, Gig, J Tillman. Bookmark the permalink.