Posted on November 8, 2008 by haymoncollins 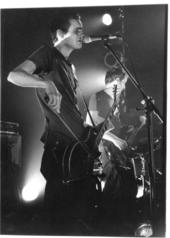 The two openers for last nights extraordinary set were either new or I didn’t recognise them – but how wonderful they were; things of rare beauty, soaring aurgasmic affairs which set the scene for the whole of the evening.

I for one was delighted that Sigur Ros harked back to their more elaborate material, although not ignoring the rather more ‘commercial’ elements of their most recent outing. Their power for me is in that crescendo-rock stylee that they deliver with such consumate ablility, showing up the plethora of looky-likey bands that attempt the same trick but fail to deliver.

The bowed guitar of Jón Þór Birgisson, heavily distorted, provides an etherial quality helping to fill the hall with those crashing walls of sound that are so mesmerising and elevating, toppped off with his falsetto vocal delivery. Honorable mentions must also go to Jón Þór Birgisson on drums and Georg Holm on bass for their rock solid underpinning and to Kjartan Sveinsson on keyboards for his understated but indispensible work

Inevitably some of the loudest cheers came for the more eassily identifiable ‘hits’ – Hoppipolla and Goggledigook etc – and whilst good they weren’t the highlights for me. The final encore and closing track from the ( ) album was the spine tingling climax – magnificent.

Also mustn’t forget to praise the staging – the combination of scratchy film on the cloth backdrop, the use of some on stage cameras to project up abstracted bits of the band, the now legendary ‘balloon’ lights behind the back cloth and the ocasssional retina burning blast-lights, all helped augment the phantasmagorical feel to the whole shebang (yes, go on , check out that old 1972 Curved Air album, Phantasmagoria!, my second ever gig in Chatham Cental Hall, ah yes)

Openening for SR were another young band of fresh-faced norse chaps from Iceland, For a Minor Reflection who acquitted themselves pretty well. Obviously part of the neugaze/crescendo rock school they wear their influences and aspirations clearly on their sleeves. Although some of their tracks could do with a more carefully structured approach; it became quite predictable where the quiet noodlng would explode it the crash bang wallop, tracks like Okrryd show real promise – good luck to them.

This entry was posted in Uncategorized and tagged Curved Air, experimental, For A Minor Reflection, Gig, Sigur Ros. Bookmark the permalink.