Posted on January 4, 2011 by haymoncollins 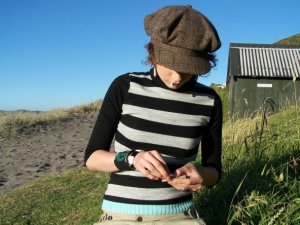 Alicia Merz aka Birds of Passage sort of slipped into my conciousness some way or another, I am not quite sure how. But I guess that’s rather appropriate given her chosen lo-fi, minimalist, dream-pop label.

Birds of Passage couldn’t be more different to my other New Zealand favourites High Dependency Unit/Mountaineater; ethereal, dream-like and echo-laden vocals set against the merest hints of instruments and Tangerine Dream-esque washes of sound.

Not the stuff for kicking off a party and definitely needing the right time and place to be appreciated the now sold out debut album Without The World (which can be listened to via the Future Recordings Bandcamp site prior to an expected re-release from Denovali early in 2011)which originally came accompanied by a volume of poetry, Garden of Secrets.

It is a thing of slowly revealed beauty and grace, the vocals delivered in that half whispered way adopted by the excellent Thomas Bartlett aka Doveman and like him this does not mean a lack of vocal ability or melody, but more a sound that demands attention and inspection.

Right now with the snow falling heavily (again) outside and the fire a-roaring, this is the aural equivalent of a duvet or a sleeping bag; warming, comforting, almost protective.

I may have got this very wrong, in which case someone will shout no doubt, but I have a feeling that Birds of Passage may be on tour with the fabby Her Name is Calla in the spring (subsequently HNIC have confirmed that this indeed true and I haven’t just made it up…). This might make sense given they are stable mates on Denovali and that Birds of Passage are (or rather ‘is’) drumming up a little financial support via Indiegogo to help cover the not inconsiderable costs of coming from NZ to play European dates. Making a contribution here of some level or other gets you some payback as well in the forms of download tracks, signed CDR’s or even specially written tracks if you are feeling very generous – anyhow seems to me to be a worthwhile little investment of anyone’s cash.

The track that got me hooked here is the rather lovely Highwaymen in Midnight Masks, linked below and part of the range of track available through Soundcloud

This entry was posted in Uncategorized and tagged Birds of Passage, denovali, HDU, Her Name is Calla, Mountaineater. Bookmark the permalink.