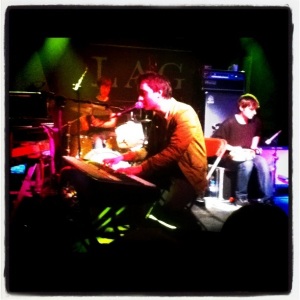 Just as I was wondering how to try and sum up how I feel about both Conor O’Brien/Villagers and the superb Becoming a Jackal album, I catch sight of the announcement that the Ivor Novello Award has just been awarded to him for the Best Song Musically and Lyrically for 2011. Well that seems to have sorted that  then…

Last night saw me and the Lad roll up to the slightly strange but endearing Trinity Centre in Bristol to catch Villagers. The last time we were here was to see the wondrous Bon Iver last time he graced these shores in 2009 (later this year he is back but in the Colston Hall – times change, eh?) and tomorrow I shall be back for Low, but I digress…

We managed to find ourselves a spot sheltered from the ubiquitous Jeff (how does he get to every gig that takes place in Bristol?) and his berserk collapsing tree dance by some unwary and floppy students who knew no better. Support was in the form of Michele Stodart, she of Magic Numbers and the bass strings, and she seemed terribly nervous. She had no need and acquitted herself admirably.

The first three numbers, including the excellent opener, Cecilia and Her Selfhood, were delivered by O’Brien, initially solo but then augmented by Cormac Curran on keyboards. Solo O’Brien shines, both because the quality of the song-writing and also for the remarkable quality of his voice, clear, unwavering and with an unusual sense of directness. 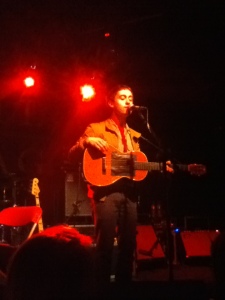 A few numbers in and the whole band joined him and Curran and they proceeded to play just about the complete album as you might expect. The rest of the fine band add the extra oomph and feedback laden guitar where it counts. But there was more than a smattering of new (well not on the album) songs, like Cecilia and the outstanding Bell, all boding very well for the next release. From a set of unerring quality it is hard to pick favourites, everyone will have their own, but Set the Tigers Free and Pieces were special joys, both with a hair tingling quality.

Not a band big on banter, I did start to wonder how much they were enjoying themselves, but when chat did arrive they seemed relaxed and good natured – just not a chatty bunch on stage I guess. O’Brien in particular has a slightly unsettling on stage aura – at times with a part shy and seemingly surprised schoolboy-looking face and then at others almost  a look of triumph and disdain – I am probably reading way too much into a few facial expressions and anyhow you can forgive a chap anything if you are as talented as he.

We saw Villagers support Elbow in the distribution depot that is Cardiff Arena not too long ago, and was pleasantly surprised at just how well they coped with such an impersonal venue. Trinity was, for fans at least, a much more human scale venue, more befitting the emotional and personal nature of the material, and whilst you can only wish them continued and well deserved success, lets hope they eschew the stadium circuit should it beckon.

An evening of absolute joy, an exemplary album and new material that bodes well for next time. They promised to return soon – lets hope they keep their word.