Posted on February 3, 2013 by haymoncollins

‘Like heaven with the lid off’ as Auntie Millie used to say. Some evenings just nail it and Friday eve at the Guildhall in Gloucester was one if those. Polar opposite supports, the Cadbury Sisters and Hector managed in their own ways to reflect the two aspects of the main talent, Turin Brakes, and acted as perfect preludes – fine choices both, and more on them later.

I’ve rather lost count of how many times I’ve seen TB now (noodling on these pages abound about shows at Cheese and Grain, Thekla, Komedia, Shepherds Bush etc to mention but a few) but there has never been a show where I haven’t left feeling uplifted with happiness restored – how many bands can you say that about? 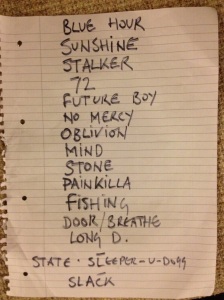 One of a handful of shows leading up to their recording in March of album number six, the set included of course many of the usual favourites but also a peek at some new material from what is promised to be a darker (I think that’s how Olly described it) album. Despite taking the stage at 9.45 they still delivered a two hour set, stretching beyond the two ‘planned’ encores into yet more late night numbers. If you judge things on such a basis, value for money is always assured with a TB gig.

Anyone who knows TB knows they are fine musicians all – Gales fine guitar delivered in his self effacing way, Olly’s distinctive and maturing vocals, Rob’s fine, fine drumming (especially when he is let loosely some of the extended numbers) and of course Caveman Eddie’s remarkable bass. Now I have a soft spot for Rob (no, not that marshy wasteland in western Ireland), his uncanny resemblance to yours truly and our shared birthday, but once again last night I was mesmerised by Eddie. His maniacal grin and early Stone Age hairdo overlay some brilliant playing – sometimes super delicate, sometime slapping chords and my favourite; finger hovering above a string, then the note is struck, like a bullet released from a gun. Top man!

Mrs HC enquired, as later we lay tucked up in our pit, what my favourite TB song is (hers is perhaps predictably Painkiller). Truth be told I can’t name just a single one, but for sure in a live setting the inspired combo of The Door and Pink Floyds Breathe is a wonder to behold – I could listen to it every night (well perhaps not every night, but you get the idea). 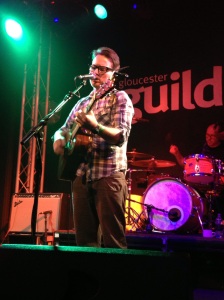 I have burbled  before about how TB have ridden the crest of the nu-folk thang back in the day to find themselves in a less hype-driven space, with one of the most loyal fan bases that come together like an extended family to revel in the quality and authenticity of their music. All was in evidence again last night, but I was struck, not for the first time, by just how much they can actually rock – no elbow patched, corduroy wearing folkies here.

Although the more laid back and melancholic songs suit me just fine on many an occasion,  how great would it be to have a couple of belters on the new album? Work in progress track, and due for the new album, No Mercy got what was announced as its first public outing to loud acclaim. I was much taken by a song in the encores, Sleeper, and (apologies if I am being dense and it is already someone else’s song) if this too might be a newbie it augers well.

So another top evening of golden music with TB, they never let you down, they seem genuinely grateful for the continuing support (not that they don’t deserve it), and a bunch of chaps you feel you would like just to hang out with for a bit, none of the ludicrous posturing and posing, people playing music because they love it and live it. 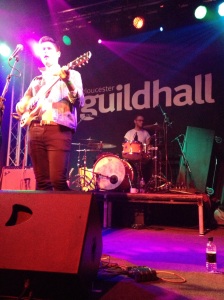 So to a more than an honourable mention to the two supports for the night. Immediately preceding TB was Hector (also @hectorband if you fancy) a Derby duo of James Capper on super shiny white Epiphone guitar/vocals and a nameless demon pounding away to excellent effect on skins. They claim it was their first gig, which if their sure-footedness and polish is to go by, feels a little hard to believe. I know that James fronts (fronted?) up Iron Door Club which must account for his confidence and lad-about-town swagger, but really, if this truly was their first outing in public, they will be a force to be reckoned with.

Although its invidious to do the ‘oh they’re a bit like’ thing, here goes, if only to help signal likely influences and echoes. A touch rockabilly, 60’s rock and roll, with more than a twang of early Arctic Monkeys (maybe its the accent?) a definite hint of That’s Entertainment era Paul Weller and a smudge of Kings of Leon when they weren’t rubbish. They are no looky likey band though, distinctive and themselves they most surely are.

No obvious anxiety or doubt, they piled straight in there with a slew of their own material (much of which can be found on their Soundcloud pages) all sounding like they had played it for an age, and clearly showing the promise that has caught the attention of people like Steve Lamacq.

They successfully cranked the crowd up, went down pretty darned well it seemed to me, and produced a remarkably rounded and full sound for two lads up there on their own. New friends must surely have come by the bucket load from last night, and should you get the chance, rock up and see them at your local venue of choice (well more likely their choice, but there you go).

Opening the evening were the Cadbury Sisters (also @cadburysisters) – as far from Hector as you could wish to go. Three actual sisters it seems (Jessica, Mary and Lucy), alone but for three mics and one acoustic guitar. Young work chum Tom Mitchell promised me they would be good and he was right. Some exquisite three part harmonies in songs of simplicity and beauty. Even though they were on early there was a goodly crowd in place and they might have suffered the indignity of being talked over but they clearly held the crowds attention despite the fragility and delicacy of their music – a sign if one was need that they are very good indeed.

They had their two EP’s at the merch desk, including the just released one, record in their local church with its family connections and life echoes. Pathetically I missed them and by the time I came to leave, so had they, drat. The Cadbury Sisters are too worthy of your attention and would be super dandy in a nice intimate venue – go find, and listen on Soundcloud.

Ah so, an evening of tip top music, people who came together for a good time, and Mrs HC and I had a neat little Thai meal into the bargain – a Friday evening doesn’t get much better than this.