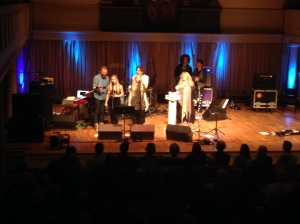 As a fan you, of course, want to rock up to a show and for it to be flawless, the embodiment of all you love about that artist. Sometimes you get it and sometimes you don’t,  because the venue’s a bit rubbish, the sound is flaky or the band just can quite turn it on live. But occasionally something else happens, like tonight (although this was a couple of weeks ago now…) with Judie Tzuke; no-ones fault, you can’t help catching a cold which is a bit of a bummer for a singer. Now some would cancel but not our Judie, at the splendid (if rather uncomfortable) St George’s she came on armed with cups of children’s Benylin  and later a more efficacious vodka, to coax her voice through the show.

I know she felt she wasn’t giving of her best and was super apologetic, but really there are many who can only dreaming of singing this well on a good night let alone when you’re feeling well below parr. For her grown up audience (and disturbingly some of us were indeed rather ‘grown up’) it mattered not, and if anything her suffering brought both the band and audience together and a palpable wave of supportive love was in the room.

Listening back now to that first album with the crystal clear voice and fine tuning, all that has happened is a maturing of the voice, a rounding out, but the essence is still there loud and clear. The newer songs also show the maturity gained after the years of work. For instance the title track, Woman Overboard, from the new album  is a finely balanced, deftly written and haunting song.

I hate to think that an artist needs to retread the ‘greatest hits’ and so hearing new and recent material reminds you both of the qualities of the musician but also that they aren’t stuck way back when. But, guiltily, it’s is good to hear some of the old stuff and better still to hear them with a new twist – the Tzuke sisters adding their own dimensions, getting the band to do the a cappella version of For You, and of course the perennial Stay With Me Til Dawn. To boot a rather lovely version of the John Martyn song May You Never – as the lady said, really a show of her favourite tunes – good job she has so many to chose from!

And a word for the excellent band. Great. So good to see Ben Mark on guitar (I can only find his twitter, @benmark7) both for the main set and also with Bailey Tzuke in the second support slot. I often find myself focussing on one band member for a show and tonight it was bass player Jimmy Sim with his fierce beard, 3 inch deep turn ups and shiny red bass; sounded great (especially the uke on a couple of songs) and a cheeky chappy demeanour at the back of the band.

A final word for the opener, Jamie Lawson, with a brief but rather lovely set – sounds a little bit like Robin Warren-Adamson, he of Wise Children,  not just in the vocal but the turn of phrase – anyway definitely worth checking out on wax and in person if you get the chance.