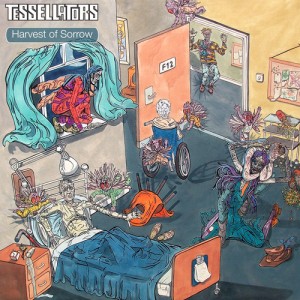 It has been a few years since the last Tessellators EP, City/La Cuidad, and a few more still since O! Mighty Sea and Red Admiral (both can be downloaded here) but ever since my introduction courtesy of the Peeblemeister I have been a bit of a fan.

Their latest album (surely too long for an EP?) Harvest of Sorrow has been a while in the making, some of the tracks being played on gigs a few years back if I remember rightly, but at last its here and, always a sucker for a concept album, this one is about a rag-tag and bobbletail collection of super heroes (The Seed, Wolfman Alexei, Drunk Wasp, Dragonfly, Desert Beetle and The Mother of all Darkness) and their various deficiencies.

‘Tis a brave soul to bang out a concept album these days and I really appreciate the two options (as well as the nifty top trumps cards pack that contains the download code) – one version with the connecting narrative, a la War of the Worlds, to tell the somewhat tongue in cheek story and the other, stripped back to the song tracks themselves. Truth be told it’s the later that is the more regularly enjoyable, where the tracks break free of the amusing but rather distracting storyline. I have to admit the story reminded me, perhaps bizarrely, of the sort of thing Jon Anderson might have written back in 1970-and-frozen-to-death instead of the overblown Olias of Sunhillow, if he hadn’t been so off his face and had fancied having a bit of a laugh now and then.

But what of the music? Already rather smitten by previous EP’s it was a bit of relief and a lot more joy to discover that even after the lengthy interval necessary to bring forth baby Tesselators and hold down jobs, the time has been spent to produce an album that feels fresher and a little more raw that earlier stuff (that’s supposed to be a compliment by the way). I am definitely a fan of the ever so slightly more ragged approach, the vocals with what feels like a one take approach (even if this isn’t the case), but all underpinned by their really rather excellent playing. It doesn’t take many listens to start appreciating the maturity of the playing that sits beneath the ‘bit of fun’ top coat. 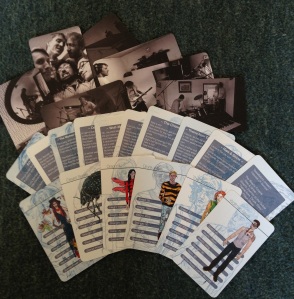 Theme from Drunk Wasp has a brilliant bass and drum line throughout (courtesy of Benjamin Beare and Alex Norman respectively), providing it a great swagger and roll atop of which is the slightly gritty vocal sound that characterises the whole album, and (presumably from Moh Rahman) the little keyboard section with hints of early era Doors Manzarek tops off a great 3’43”. Hard on its heels The Chase continues the great bass and drum sound with a deceptively far back in the mix guitar – two great tracks.

I know that Dan Barrett works hard on his guitar sound and in Dragonfly this care shines through especially around 2’25” or so and then again around 4’20”, lovely stuff indeed!

Wolf Man Alexei has a bit of an Eastern-come-Voix Bulgares start to it, but that all ends when the track kicks off properly around 2’10” after which it rocks along like a thing possessed, once again sitting on a rock solid rhythm foundation. Desert Beetle has that rather appealing Kashmir-stylee start to it and that eastern flavour started in Wolf Man runs though this track too, with a bit of tasty distorted guitar in the closing section.

Closer Tony Stark has that great combination of end of era 70’s, slightly knowing punk band sound with a neat little hook line, some rollicking guitar licks and the trademark drive from the skins and bass. Top way to end the album.

I seem to get a fair bit of rather lovely ambient, electro, drone stuff in the inbox, all of it welcome. But ah! what a deep joy to have a kick up the posterior with an album like this, something so determinedly ‘other’. How could I not be seduced by a tale of  Marvel-esque super heroes from a band for whom  I have a real soft spot. Probably their finest set yet in my opinion, great songs, delivered with real ability and a punk-ish sensibility by a bunch of chaps whose sense of fun from playing together shines through every track.

This entry was posted in Uncategorized and tagged Tessellators. Bookmark the permalink.