ATOMOS – A Winged Victory for the Sullen at the Barbican 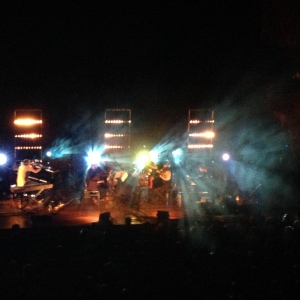 A year ago last summer a friend and I stole a sunny afternoon from work and went swimming in a deliciously cold lake. Under the thick, cool, green and blue waters the colours changed with the sunlight from above, shapes of plants and branches appeared and receded again before you could divine them clearly. The enveloping water in turns cold and then warm without reason, the whole was a shape-shifting world of the known and unknown, the familiar and the strange, an illicit few hours etched into the memory.

Weary from a torrid day at work, this evening’s show with A Winged Victory in the Milton Court Concert Hall at London’s Barbican, shared many parallels with that day at the lake. The music of Messrs’ Adam Wiltzie and Dustin O’Halloran is a thing of rare beauty and emotion, with that extraordinary capacity to transport you from the here and now and let you be lost in remarkable soundscapes.

ATOMOS was written as an original score for contemporary choreographer Wayne McGregor’s (London Royal Ballet) newest dance piece. Mr P, my companion for tonight, and I first heard this at a small venue in Reading well before it had been committed to tape in the studio and it was beautiful. Tonight it had developed into an astonishing piece, played without pause with the attendant string quartet.

At once so simple but complex, the treated guitar, keyboards and strings swirl around each other, rising and falling, merging and re-emerging like the shapes and colours in my lake. Fragments of half remembered melodies rise like figures from the mist only to retreat again before they outstay their welcome.

I know my prose has turned somewhat purple, but it is so seldom you experience such profound, affecting and emotional music, performed by such self-effacing musicians. Even more than on the previous occasions I have heard them play, tonight was indeed special, another example of a couple of hours ever to be etched on the memory. Transcendent.

This entry was posted in Uncategorized and tagged A Winged Victory for the Sullen, Adam Wiltzie, Dustin O'Halloran, Gig. Bookmark the permalink.