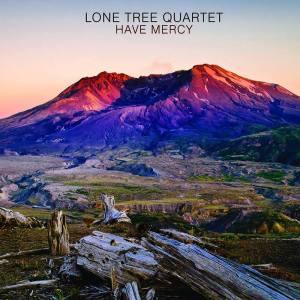 Its always a bit of a thrill when a band gets in touch directly instead of some faux-matey PR note introducing the next big thing that never will be. Its a bigger thrill still when you listen in and the musical baby they have delivered is pretty dang good.

I clocked an email from Sam Smith in my inbox, and yes for the most fleeting of moments I thought it might be ‘that’ Sam Smith, he of the hyped up awards and all. But this Sam Smith was dropping by from the Pyrenees to intro his band, Lone Tree Quartet, tagged as being from Oxford, and much more to my taste and my demographic I suspect. Mr Smith was pointing at their, now newly released, album Have Mercy, available now for a few measly earth pounds from their Bandcamp site and sporting a natty photo of Mount St Helens, unless I am much mistaken.

A bit bluesy, a bit 70-‘s rock, a twist of something a bit more contemporary and edgy, a bit hard to categorise, if thats what you fancy doing. But however you badge them there are a few things you can’t deny. The songwriting is rock solid throughout, hooks a-plenty, melodies that you find yourself humming hours later; and the songs have a depth, a story; they are felt. The playing is uniformly excellent, with a polish and ease that only comes from chaps that know each other well. Even before you are told, you know they have played both together and apart for more than just a couple of months during the summer holidays in their parents garage; this is playing borne of experience, practice and chemistry.

Given the bands name they are, appropriately, four chaps: John Cunningham – vocals and guitar, Stephen Page – drums and percussion, Sam Smith – guitar and vox and Gary Warmington – bass. Its always a little invidious to highlight particular parts of a band, and especially when, like here, they all make a powerful contribution. But here goes! I assume its John C’s vocal that takes the lead most times here, and its a joy to hear a voice thats not a reedy, thin thing but warm and thick like a winter duvet, syrup on your morning porridge. The other stand out item here is the guitar work, I think mostly Mr Smith, with the sorts of breaks and riffs that are, stupidly, not so trendy now – what colour and sparkle they bring, nowhere more so than my two favourite tracks, Winter Coat, and Wild West.

With one or two gigs to launch the new album, I imagine they give a fine account of themselves live, probably (as with many-a band) even more muscular when on a stage. And thats another thing, you just know that what you hear on the CD/download or whatever, is pretty much exactly what you would get live; no extra tracks being played off the lappy to flesh the sound out, if this lot need such frippery and trickery I’d eat my hat.

A swift little email exchange added a little info about Mr Smith and the band. A Sheffield lad via Oxford and now the Pyrenees, Sam is a self-taught musician with a family that was into English trad music, he’s been through the folk, classic rock and classical guitar route, which must account for the quality of his playing, together with a with a welter of gigs and recording experience.

Lone Tree Quartet members have known each other and played together in various guises for a good number of years but came together in this form around the time Sam legged it to France. The geography and other day-to-day issues meant that this album has taken a while to pull together, but together it is and has just been self-released onto an unsuspecting world.

Amongst other random bits and pieces we mused about Gary’s funky line in T-shirts, that one of Sam’s fav dishes happens to be pan-fried Bream with harissa and rose (find it in Ottolenghi’s Jerusalem cookbook), likes many things Moroccan including their food, music and being the source of his first Oud… and in case you were wondering, he has a liking for philosophical chaps the Stoics (along with the Lad as it happens)

Well thats all fine and dandy but its actually all about the music, and the music here is fine, rich, intensely played and felt. The real and genuine article.

This entry was posted in Uncategorized and tagged Lone Tree Quartet. Bookmark the permalink.