Karthryn Stewart and Sean Lakeman at the Convent Club 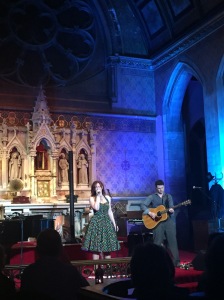 Reminded again of our great good fortune to have such a special venue as the Convent Club right on our doorstep, Mrs H-C and I rolled up on a drear Saturday eve to the now familiar intimacy that is the Chapel, to hear Kathryn Roberts and Sean Lakeman. In support duties was local talent, Hattie Briggs, more of her later.

The folk ‘thing’ has always been a part of me it seems from the earliest days of Steeleye Span (mmm!) and progressively through other voices like Joni Mitchell with her Laurel canyon-folk sensibilities, to the more contemporary americana sounds of M. Ward and the pure Englishness of the Carthy/Waterman  and a hundred others besides.

I still struggle I must admit with certain elements, who shall remain nameless, but at its best there is a vein of something deep and resonant about the folk tradition. Much like the extraordinary place in which we sat; gothic, ritualistic, embedded in our culture, so too does this music have such a deep place, be it the bucolic Devonian childhood of Mr Lakeman or the more industrial Barnsley background of Ms Roberts. Of course the story-telling is a part of it, but also the music, the chords, the progressions all speak to that golden thread that weaves through our shared history.

This particular marital pairing join together a remarkable and powerful voice (as well as other instrumentalist skills) and one of the finest guitarists (and a great producer) you could hope to hear. The combination echoes both that fine tradition but also runs with a contemporary edge and keeps them well clear of Ye Olde English pastiche. The older, traditional songs are handled with care and respect but given a lift for the modern ear, and their own material reflects issues of the day but delivered with the skill and musicality only possible with such a deep understanding of the music and its history.

The acoustics and equipment in the Chapel are exemplary but you know full well that this pair would sound just as great in the primary schools where they perform for their twin girls friends. Kathryn’s voice is of the highest order with a power and ease you would be hard to match; Sean’s guitar has the attack, drive and finesse that would shame many a musician.

The set, quite properly, contained a great deal from their new album, Tomorrow Will Follow Today, and a fine suite of songs it is too; beautiful, affecting and sparkling songs, all available for the price of two drinks from the bar over on their website. Their tour dates continue for a few weeks and details can be found here – if you are in striking distance, rock along, you cannot be disappointed.

Hattie Briggs, local (to me!) Stroud singer-songwriter, is a recent BBC Radio 2 young Folk Awards nominee, and its not hard to see why. A voice as clear as crystal, her own songs with the strength and precision to stand alongside her rendition of Fields of Gold. Her set contained a good smattering of songs from her soon to be released debut, Red & Gold, available for pre-order from her web site and some streamable off her Soundcloud page. Unashamedly a fan of Eva Cassidy, I also caught glimpses of Carly Simon which can’t be a bad thing! On tour for most of the Roberts/Lakeman tour, Hattie is someone who should be seen and heard.

So an evening of fine music, in an equally fine setting, and with an intimacy that this sort of music blossoms in. Here is music that will last, not just because of the superb musicianship but also because it is rooted equally in the past and the present, reason enough to safeguard its future.